Malachi (18 x 28″ poster) by Mecca Normal guitarist David Lester is included in the 2014 Whitney Biennial. The exhibition also includes a recording of a live set performed by underground rock duo Mecca Normal, and both sides of the cover of the Mecca Normal 7″ record that includes the song Malachi about war protester Malachi Ritscher. 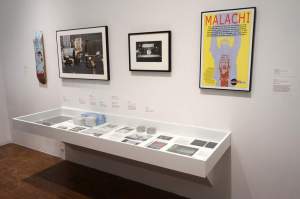 Exhibit at the 2014 Whitney Biennial. 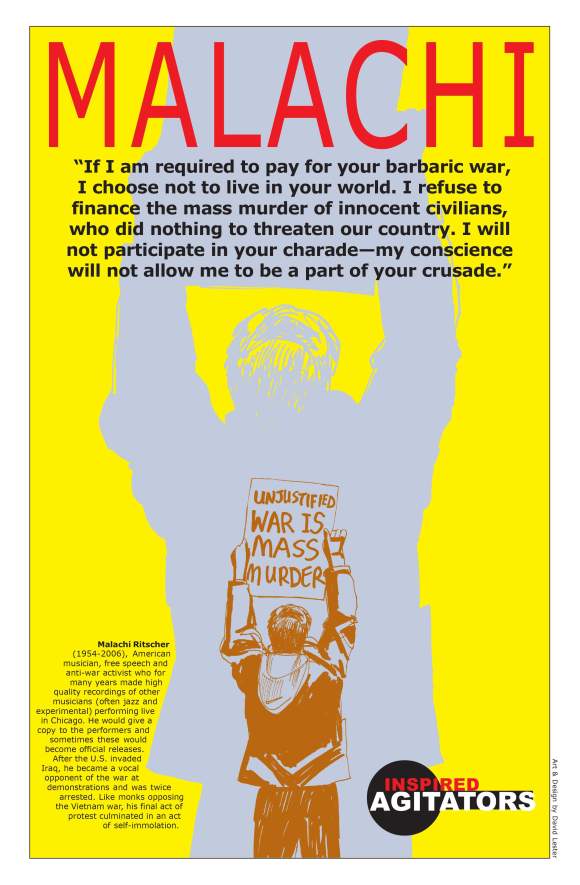 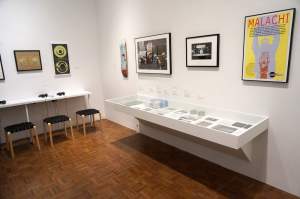 Exhibit with listening stations at the 2014 Whitney Biennial. 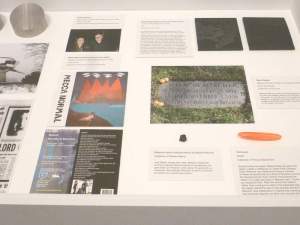 Exhibit in the vitrine at the 2014 Whitney Biennial.

The painting on the record cover is called “Discovering Utopia”
by Mecca Normal vocalist Jean Smith.
Click through to high resolution image.

Back cover with “Malachi” lyrics by Jean Smith.
Click through to high resolution image.

These four artifacts – and a photo Malachi took of Mecca Normal after he recorded the set at the Empty Bottle in Chicago in 2002 – are part of Public Collectors: Malachi Ritscher – an exhibit curated by Chicago’s Marc Fischer about American activist and music documentarian Malachi Ritscher (1954 – 2006) who self-immolated on a freeway median outside of Chicago to protest the war in Iraq. Ritscher made a video of this action that was not widely seen.

“It was Malachi’s intention for the video of his protest, his death, to reach people through mainstream media, to jar them from complacency, to have them raise their voices to end the war. But that wasn’t what happened. The video was not released in that way. When we added our song – and the poster – to our performances and classroom events, we regarded them as extensions of Malachi’s intention. We had created documents about the documentarian whose final statement on war was not heard. We created art and music because Malachi’s voice was not heard.” – Jean Smith, from the 2014 Whitney Biennial catalog

“Art and music can express outrage, inspire action, or soothe and distract; please think about priorities and be involved in things that matter.” – Malachi Ritscher, from his website

Malachi – the title of David Lester’s poster – includes text about Ritscher’s beliefs and a drawing of Ritscher attending an anti-war rally in Chicago. The poster is part of his ongoing “Inspired Agitators” series of posters which tours in the USA and Canada as an element in a classroom and art gallery event called How Art and Music Can Change the World, co-presented with Jean Smith. Of his poster series, Lester says, “Presenting the ideas and lives of activists and artists this way is a form of social protest.” David Lester is giving away the poster as a pdf document.

Public Collectors: Malachi Ritscher will include artifacts from Ritscher’s work as a documentarian focused on recording the Chicago music scene, including a Mecca Normal performance at the Empty Bottle. The live set was recorded by Malachi Ritscher on November 11, 2002 while Mecca Normal was on tour with their album “The Family Swan” (Kill Rock Stars, 2002). On this occasion, a touring version of How Art and Music Can Change the World was being exhibited upstairs at the Bottle Cap. Malachi visited the art exhibition, which included many of David Lester’s “Inspired Agitators” posters and Jean Smith’s paintings depicting politically-charged events.

Malachi – the Mecca Normal song about Malachi Ritsher’s intentions and his death – was released as a 7″ record in 2010 by Olympia, Washington’s K Records. The cover art for the record is a painting by Jean Smith called Discovering Utopia. An acoustic version of the song and a video by Jean Smith were released on November 3, 2013, the seventh anniversary of Malachi Ritscher’s death.

In September, 2014, Public Collectors: Malachi Ritscher will be exhibited at the Experimental Sound Studio in Chicago.

Free download – acoustic version of Malachi released on November 3, 2013, the seventh anniversary of Malachi Ritscher’s war protestation in Chicago. Jean Smith vocals, David Lester acoustic guitar, KRAMER on bass and keys. Recorded by Rat Bastard at the Laundry Room in Miami Beach during the “Empathy for the Evil” sessions. Produced and mixed by KRAMER.